In its cadet senior leadership promotion ceremony held Wednesday, November 23, Saint Thomas Academy named the senior cadets who will lead the corps of cadets for the remainder of the 2022-2023 school year. Samuel Fulton of Edina was named the 2022-2023 cadet colonel and brigade commander, the highest-ranking officer in the corps of cadets. Jackson Cercioglu of Inver Grove Heights was promoted to cadet command sergeant major, the senior-most non-commissioned officer (NCO) in the brigade. Fulton and Cercioglu will work collaboratively with one another and with the Academy’s administrators and military leaders to implement a variety of events and activities at the Academy.

“Cadet Colonel Fulton has demonstrated the maturity, poise and interpersonal skills to succeed in his challenging new role,” said retired U.S. Army Colonel Neil Hetherington, commandant of cadets, of the 115th Cadet Colonel in the history of the Academy. “Together, Fulton and Cercioglu will continue to inspire and lead our cadets. The administration and military leadership teams have complete confidence in this class of senior leaders.” Since his freshman year, Fulton has pursued and excelled in leadership opportunities, athletics, academics and performing arts at Saint Thomas Academy. He is the first band company commander to be promoted to cadet colonel in more than 50 years. His past awards and recognition include: the Eagle Award, Citation and Medal for Distinguished Service, NCO of the Quarter, Superior Cadet Award, Directors Award and the Harvard Book Award. Fulton serves as a peer mentor captain and on the student council. He is a life scout, a varsity football and lacrosse player, and a member of the Model UN team, VISTA concert band and VISTA jazz band. Fulton plans to study business at Dartmouth College, University of Notre Dame, University of Minnesota or Boston College. 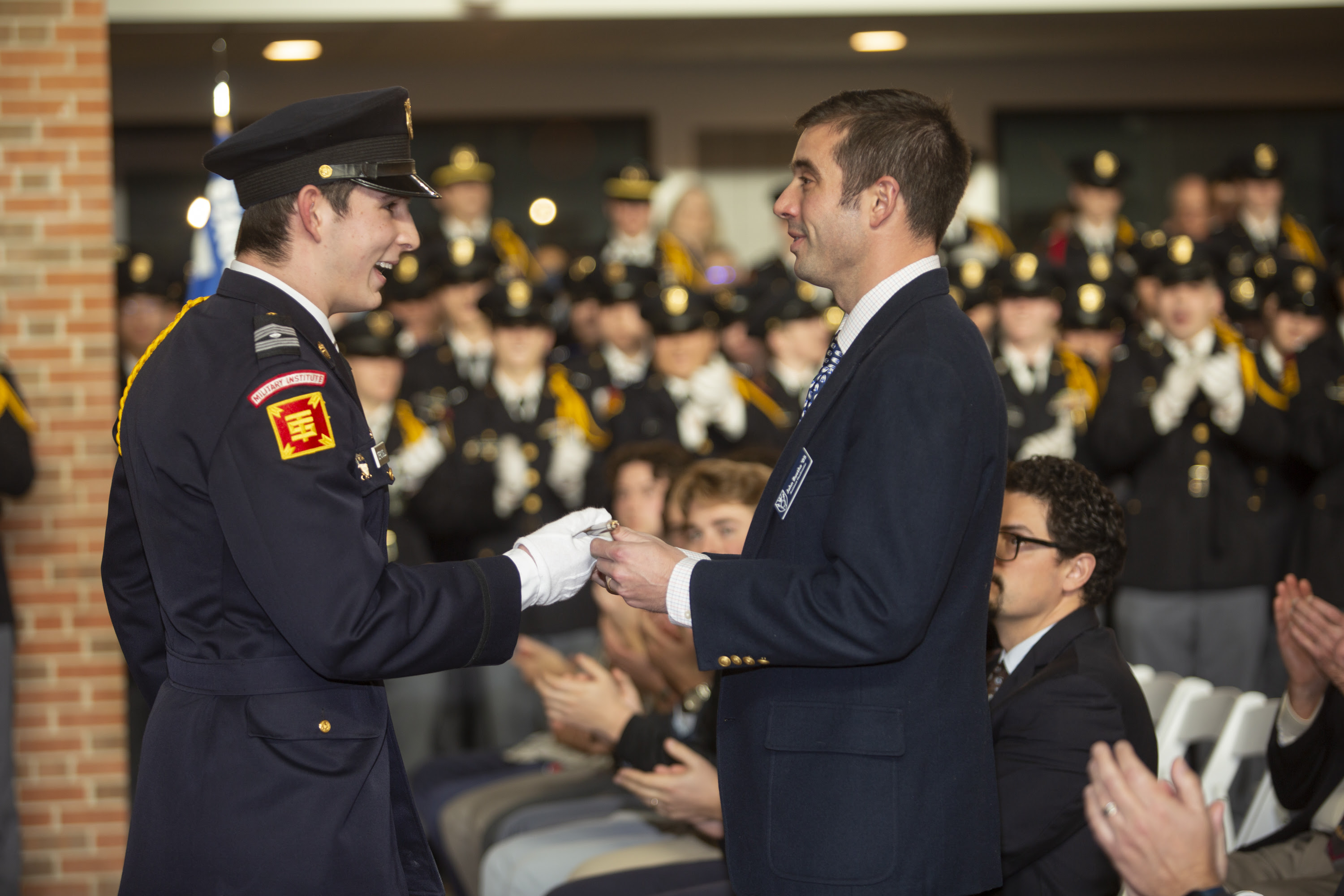 As the Academy’s first board-selected brigade command sergeant major, Cercioglu serves as the brigade’s standard bearer for uniform, grooming, formations, drill, reviews and conduct. He also serves as the principal advisor to the cadet colonel in decisions regarding the corps of cadets. Cercioglu most recently served as first sergeant for the delta company. His awards and recognition have included the Headmaster's Award, Athlete of the Year Award, Chris Hannigan Leadership Award, Torch Award, Saber Award, All-District in football and All-Conference Honorable Mention in wrestling. He is a peer mentor and captain of the varsity football and wrestling teams. He is also a member of the Model UN team and the varsity track team. Cercioglu has applied to the University of Minnesota, South Dakota State University, University of North Dakota, University of Saint Thomas, the United States Military Academy and the Air Force Academy, with aspirations of playing college football and studying business or pre-law. 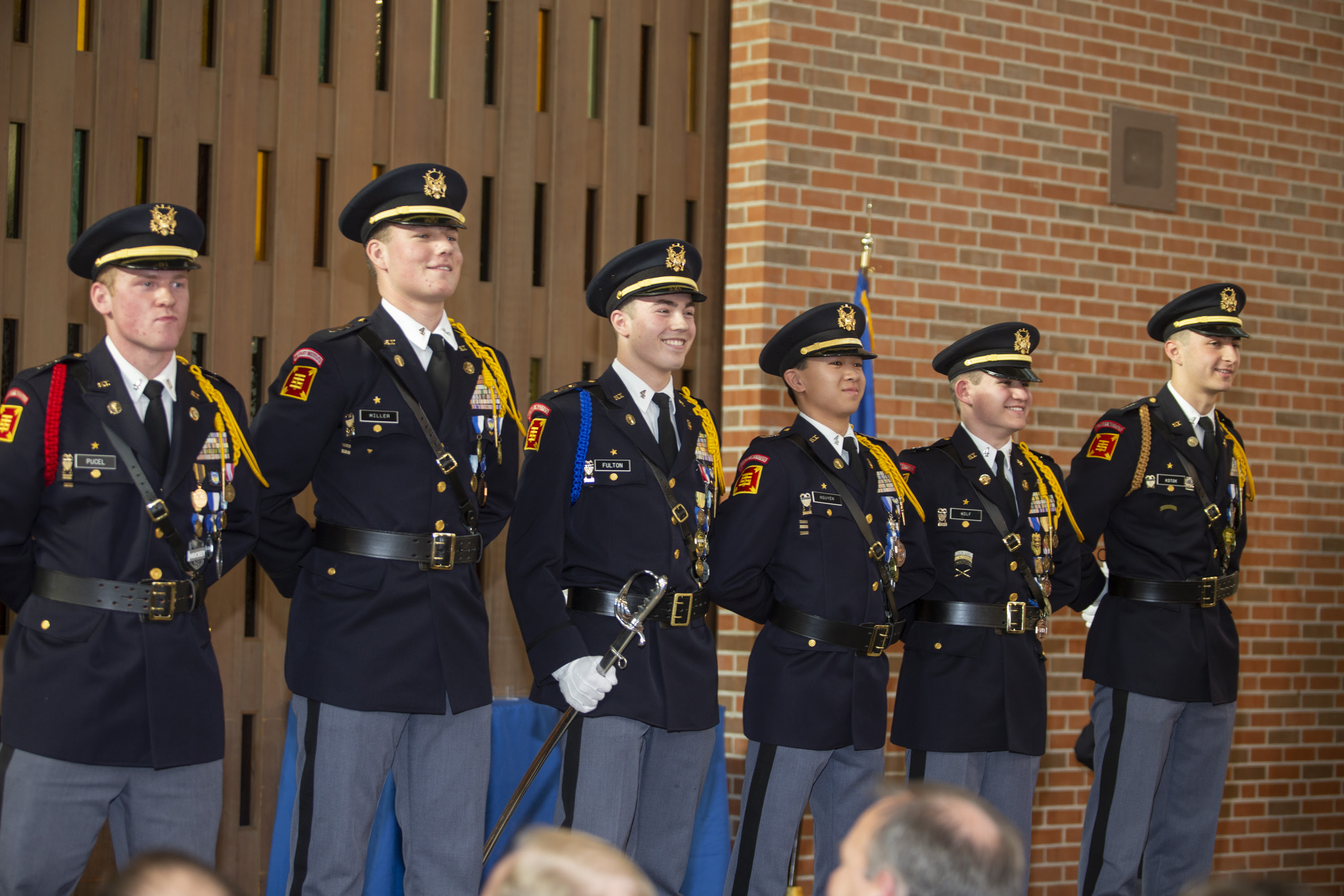 Five Promoted to Cadet Lieutenant Colonel
Five additional seniors were also promoted from cadet captain to cadet lieutenant colonel at the ceremony. They are (pictured L-R, with Fulton the third from left): Four Promoted to Command Sergeant Major
Approximately 25% of the leadership positions within the corps of cadets are cadet NCO positions. Five senior-leader cadets were selected to serve in the senior cadet NCO positions within the brigade: one brigade command sergeant major (CSM), three battalion CSMs and one operations chief with the rank of cadet master gunnery sergeant (an equivalent rank to CSM but with staff versus command responsibilities). The cadet master gunnery sergeant is a new position and reflective of a brigade staff, as well as the Academy’s own military leadership department.

Those promoted include (pictured L-R, with Master Gunnery Sgt. Neil Constine on the left, Headmaster Kelby Woodard on the right and Cercioglu the fourth from left):

Gavin Engelbert of Eagan
Eric Zauha of Cottage Grove
Adam Husaby of Inver Grove Heights. Husaby was selected for promotion to cadet master gunnery sergeant and will continue to serve in his existing role as the operations chief for the brigade staff.
Luke Audette of Saint Paul (Highland)

Selection Process
The cadet colonel and senior leaders are chosen by a selection committee comprised of the headmaster, commandant of cadets, assistant headmaster, dean of students, school chaplain, senior enlisted member of the military leadership department, a faculty representative and a student representative, with peer, student and faculty input. The extensive application and evaluation process begins in cadets’ junior year. The committee evaluates each of the senior leaders in the corps of cadets for promotion, considering academic performance, co-curricular involvement, awards and recognition, merits and demerits, military performance, community service and leadership abilities.